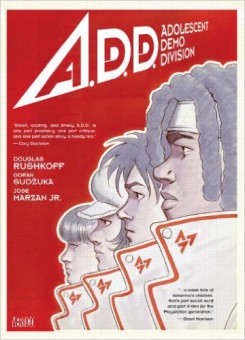 The Adolescent Demo Division are the world’s luckiest teen gamers. Raised from birth to test media, appear on reality TV and enjoy the fruits of corporate culture, the squad develop special abilities that make them the envy of the world–and a grave concern to their keepers.

One by one, they “graduate” to new levels that are not what they seem. But their heightened abilities can only take them so far as the ultimate search for their birth families leads to an inconceivably harrowing discovery.

“ADD’s laser-guided smart missile zeroes in on the black undercurrents of gaming culture, celebrity and the pharmaceutical industry to target the secret wars being waged behind our monitor screens. In a world defined by ubiquitous media, best-selling wargames, autistic disorders and the commodification and exploitation of youth, Doug Rushkoff and artist Goran Sudzuka vivisect the zeitgeist with a sleek tale of tomorrow’s children, that’s part social sci-fi and part “X-Men” for the PlayStation generation.”—Grant Morrison

“Douglas Rushkoff’s graphic novel debut,“A.D.D.” (Adolescent Demo Division) is a tight, action-packed comic wrapped around a serious, thought-provoking critique of the commodification of youth culture. The titular ADD is a squad of specially trained young video-game champs who are worshipped as teen idols. But while the lives of the ADD are outwardly full of glamor, and while they get all the video games they can play, they lead lives of intense misery. Hypercompetitive, locked away in a high-security compound, manipulated by the adults around them, the ADD live their lives in anticipation of “levelling up,” a mysterious graduation that takes their best and brightest away to some unknown (but presumably wonderful) next life.

And of course, things aren’t what they seem — the corporation that runs ADD isn’t merely an entertainment conglomerate, they have a secret agenda that’s all about learning better ways to manipulate and control consumer culture. The details of this plot unfold to the dissident ADDers as well as the reader through a series of ever-more-deadly adventures.

Smart and trenchant, ADD was a great great read.”

“It’s a great read and a startling look at a reality that is already all around us. It works on every level, as a fascinating graphic novel, a biting social commentary, and a warning to get our act together.” — Huffington Post Review and Interview

“There’s something strangely hopeful about the level and quality of thought that went into Douglas making this work of art. Like we’ve stepped into the middle of a great cultural shift, like we’ve caught Superman in that supply closet, changing back into Clark.” — PopMatters Review/Interview

“We’re living on top of operating systems, however much they try to hide that from us.” —CBR Interview