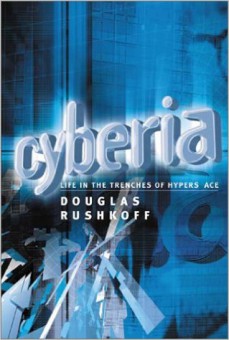 Preface to the 1994 paperback edition

A lot has happened in the year or so since I wrote this book. More than usually happens in a year. Thanks to technologies like the computer, the modem, interactive media, and the Internet, we no longer depend on printed matter or word of mouth to explore the latest rages, innovations, or discoveries. By the time a story hits the newstands, most insiders consider it “old news” and are already hard at work on the next flurry of culture-bending inventions and activities.

Cyberia is about a very special moment in our recent history — a moment when anything seemed possible. When an entire subculture — like a kid at a rave trying virtual reality for the first time — saw the wild potentials of marrying the latest computer technologies with the most intimately held dreams and the most ancient spiritual truths. It is a moment that predates America Online, twenty million Internet subscribers, Wired magazine, Bill Clinton, and the Information Superhighway. But it is a moment that foresaw a whole lot more.

This book is not a survey of everything and everyone “cyber” but rather a tour through some of the regions of this new, fledgling culture to which I was lucky enough to gain access. Looking back, it is surprising to see how many of these then-absurd notions have become accepted truths, and disheartening to see how many of the most optimistic appraisals of our future are still very far from being realized.

Cyberia follows the lives and translates the experiences of the first few people who realized that our culture was about to take a leap into the unknown. Some of them have succeeded beyond their wildest expectations and are now practically household names. Others have met with catastrophe. Still others have simply faded from view, their own contributions to the cyberian renaissance already completed.

The people in this book, and thousands of others like them around the world, understand the implications of our technologies on our culture, thought systems, spiritual beliefs, and even our biological evolution. They still stand as the most optimistic and forward-thinking appraisers of our civilization’s fate. As we draw ever nearer to the consensually hallucinatory reality for which these cyberians drew the blueprints, their impressions of life on the edge become even more relevant for the rest of us. And they make more sense.

“… a vivid portrait of society’s fringe and their rather unsettling role in the future of cyberspace.” – Howard Manly, The Baltimore Sun

“Rushkoff, a New York-based journalist, goes west to Berkeley for a look inside Cyberia—the emerging countercultural terrain of computer hackers, “smart” drugs, house music, and a range of alternate “cyberpunk” lifestyles and anarchic philosophies. This largely sympathetic report from the latest frontier will undoubtedly strike many older readers as outrageous, but others (especially those with clear memories of the 60′s) may find much of the rhetoric familiar, even nostalgic. In fact, many of the ingredients hark back to the Berkeley scene of nearly three decades ago: the text is full of references to acid trips, pagan rituals, and Grateful Dead concerts, and even Timothy Leary puts in an appearance at a virtual reality demonstration. The most significant new element in the mix is the computer— especially when used to connect with other computer users around the world. Leary advised dropouts to “find the others,” and computer networks like the WELL have made it easier than ever for Cyberians to locate those of similar beliefs. Rushkoff interviews authors, drug dealers, musicians, and hackers; watches two electronic outlaws stealing ATM codes; joins a role-playing game in which he acts the part of a thief; and talks to eco-terrorists and cultists about their beliefs. While some readers might wish the author had kept his nonsense detector more finely tuned, much of the book’s value lies in Rushkoff’s ability to resist patronizing his subjects. A provocative, wide-ranging survey of the current state of the interface between the longings of youth and the wild potentials of computer technology.”
–Kirkus Review