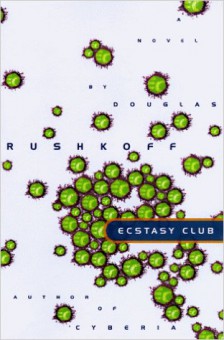 When the young, hypertalented idealists who call themselves Ecstasy Club find an abandoned piano factory in Oakland, they make it the focus of a round-the-clock rave the likes of which the Bay Area has never seen before. They also make the factory a base camp in their search for a method of time travel that combines computer wizardry, esoteric spirituality and mind-altering substances. The club’s mesmeric leader, Duncan, and the story’s resourceful narrator, Zach, actually manage to “break time” online, only to discover that an unsettling array of characters has beaten them to it. Government agents, corporate saboteurs, religious zealots and even the local cops are suddenly out to get the club. As they battle an ingeniously conceived conspiracy (think Thomas Pynchon meets The X-Files), Zach battles his own growing affection for Duncan’s lover, Lauren, and begins to wonder whether enlightenment is all it’s cracked up to be.

“Provocative and streetsmart, Ecstasy Club transports you into a world of conspiracy, cults and eroticism that operates outside the mainstream’s radar.”
—Carla Sinclair, author of Net Chick and editor of bOING bOING

“Rushkoff turns his extensive knowledge of the cyberscene into a brilliant fictional account of the rise and fall of a rave club. His work rides the fractal edge between hippy values and the new wave of technoshamanism, to chronicle the commercialisation of the Underground. Ecstasy Club is essential reading for conspiracy theorists, subculturists, hedonists and anyone with a nanobyte of feeling for life as it should be lived.”
–Jeff Noon, author of Vurt, Pollen, and Automated Alice

“A trans-millennial whodunnit! A wonderfully engaging tale with prophetic overtones about love, life, sex, cults, conspiracy theory, evolution, and designer drugs. This is a very funny, smart book, with shades of Aldous Huxley, Philip K. Dick, Colin Wilson—and Irvine (‘Trainspotting’) Welsh! Join the rave, read the book—it’s got a 135 beat-per-page click track that will entrance you!”
–Alexander Besher, author of Rim: A Novel of Virtual Reality and Mir