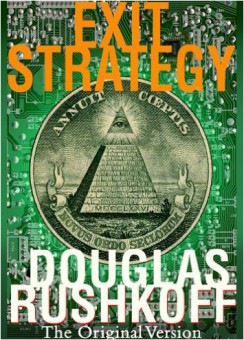 All author’s US royalties will be donated to the Free Software Foundation and the EFF.

An allegory of the story of Joseph, Exit Strategy (Bull) is the tale of a young hacker named Jamie Cohen who, betrayed by his posse, ends up as the right hand man of one of New York’s most powerful venture capitalists. He becomes part of a plot to launch a new online program capable of hypnotizing web users into passionate consumers and investors. But his hacker buddies have also developed their own new networking tool – “Teslanet” – which could make the Internet, and the NASDAQ pyramid, itself, absolutely worthless.

Jamie must decide who is friends are, and how to execute his own exit strategy from the market madness. Meanwhile, his hallucinations of brokers turning into bulls – real bulls – are loosening his grip on the real. Or are they?

Although the book takes place in the near future, the text itself only “surfaced” online in the 23rd Century. The entire text is annotated with footnotes so that terms like “Microsoft” and “NASDAQ” make sense to the future reader who, presumably, lives in a world beyond such things.

The book was online for over a year as an “open source novel.” This meant that online readers could add their own footnotes and annotations to the text, in the voices of their own future anthropologists. 100 of these footnotes have been included in the US release of the book.

Yahoo Internet Life, where the novel was hosted, has since gone under (like so many of the businesses described in the novel). Thanks to all of you for the thousands of annotations you wrote. We’ll let you know if we put the project back online.

“As someone once said, prepare to be amazed. Exit Strategy will amaze you as you read it since it is much more than it seems! It was written as a satire, but upon reading it, you will find it to contain the elements of future forecasting, truths about modern life, business commentaries and several others. It is an education in the world of internet businesses and the airy bubbles created therein ” – Anne K. Edwards, eBook Reviews