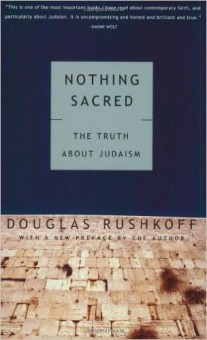 Disaffected by their synagogues’ emphasis on self-preservation and obsession with intermarriage, most Jews looking for an intelligent inquiry into the nature of spirituality have turned elsewhere, or nowhere. Meanwhile, faced with the chaos of modern life, returnees run back to Judaism with a blind and desperate faith and are quickly absorbed by outreach organizations that—in return for money—offer compelling evidence that God exists, that the Jews are, indeed, the Lord’s “chosen people,” and that those who adhere to this righteous path will never have to ask themselves another difficult question again.

Ironically, the texts and practices making up Judaism were designed to avoid just such a scenario. Jewish tradition stresses transparency, open-ended inquiry, assimilation of the foreign, and a commitment to conscious living. Judaism invites inquiry and change. It is an “open source” tradition—one born out of revolution, committed to evolution, and willing to undergo renaissance at a moment’s notice. But, unfortunately, some of the very institutions created to protect the religion and its people are now suffocating them.

If the Jewish tradition is actually one of participation in the greater culture, a willingness to wrestle with sacred beliefs, and a refusal to submit blindly to icons that just don’t make sense to us, then the “lapsed” Jews may truly be our most promising members. Why won’t they engage with the synagogue, and how can they be made to feel more welcome?

Nothing Sacred is a bold and brilliant book, attempting to do nothing less than tear down our often false preconceptions about Judaism and build in their place a religion made relevant for the future.

“I read Nothing Sacred reluctantly, from a stance of deep skepticism, and learned to my delight and enlightenment, that this is truly a Jewish approach. Rushkoff uses millennia of Jewish teachings to reveal that God is indeed to be questioned not obeyed, created not worshipped, continually revised, reconsidered, and debated – not graven in stone. I truly believe this book might end up as one of the most important works of Jewish literature, worthy of comparison with Maimonides and Buber. Many will be outraged and even furious at Rushkoff for daring to revise the Jewish tradition of self-questioning. I thank him for helping me feel like a Jew again.” –Howard Rheingold

“This is one of the most important books I have read about contemporary faith, and particularly about Judaism. It is uncompromising and honest and brilliant and true. It will be a painful revelation to many, but also, for all of us, a burst of badly needed intellectual and spiritual oxygen and light.” –Naomi Wolf

“Nothing Sacred is the work of Rushkoff the scholar and Rushkoff the evangelist. As a responsible scholar, Rushkoff includes a bibliography, an index and a full appendix of background commentary for each chapter. But Rushkoff the passionate, some would say rambunctious, evangelist preaches his mission text virtually full throttle-no endnotes, little cautiously calibrated debate with dissenting sources, and only minimal compassionate coddling for Jews who might be scandalized, fearful or confused. To Rushkoff it is so clear, so obvious; it’s time to “do Judaism the good way and the smart way,” first to/with Jews and then to/with Gentiles.” – Gwen Nowak, Books in Canada