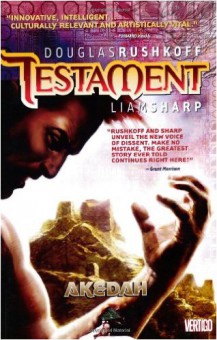 Rushkoff brings the prophetic tradition to comics with his first and widely acclaimed graphic novel series for Vertigo, retelling the Bible as a near-future global conflict over currency and reality itself. Humans and gods struggle to dominate a mythic and relevant narrative both within the panels and between them.

The full series of Testament is now available in a single digital omnibus.

“Testament is a provocative, ably-written tale that boasts some of the most beautiful illustrations I have seen in a comic book this year. This is one comic book that, though polarizing in subject matter, utilizes all the bells and whistles of traditional hero comic books to tell a tale unlike anything we have seen before.” – Robert Murray, The Comics Bulletin