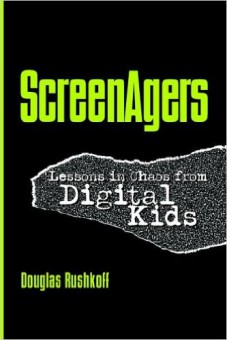 Screenagers is the updated, academic edition of the previously-published Playing the Future.

“Media theoriest Douglas Rushkoff sees the current cultural moment as a true renaissance, fueled by new technologies, media, activities, and ideas. Posing that the current leap into digital culture marks as profound a shift as from orality to literacy, he looks to the world of the young people he calls ScreenAgers for clues about what the future has in store. This book makes a far-reaching, astonishingly accessible case for the positive impact that digital technologies will have on our ability to participate more actively and thoughtfully in the chaotic landscape ahead of us.

This groundbreaking work was first published a decade ago, and inspired cultural phenomena from The Teletubbies and Pokemon to Meetup.com and Moveon.org. The word “screenager” has even been accepted to the Oxford English Dictionary. This brand new updated and expanded edition includes not just new examples, but new ideas and conclusions drawn based on 10 years of experience watching these ideas become incorporated into academia, business, education, and culture. This special edition also includes a series of essays and articles by the author that demonstrate the various ways these ideas can be contextualized for different audiences. Screenagers is both a great introduction to the field of media ecology as well as one of its most dimensional and passionately argued texts.”