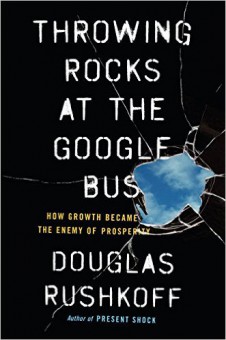 The digital economy has gone wrong. Everybody knows it, but no one knows quite how to fix it, or even how to explain the problem. Workers lose to automation, investors lose to algorithms, musicians lose to power law dynamics, drivers lose to Uber, neighborhoods lose to Airbnb, and even tech developers lose their visions to the demands of the startup economy.

Douglas Rushkoff argues that it doesn’t have to be this way. This isn’t the fault of digital technology at all, but the way we are deploying it: instead of building the distributed digital economy these new networks could foster, we are doubling down on the industrial age mandate for growth above all. As Rushkoff shows, this is more the legacy of early corporatism and central currency than a feature of digital technology. In his words, “we are running a 21st century digital economy on a 13th Century printing-press era operating system.”

In Throwing Rocks at the Google Bus, Rushkoff shows how we went wrong, why we did it, and how we can reprogram the digital economy and our businesses from the inside out to promote sustainable prosperity for pretty much everyone. Rushkoff calls on business to:

• Accept that era of extractive growth is over. Rather, businesses must – like eBay and Kickstarter – give people the ability to exchange value and invest in one another.

• Eschew platform monopolies like Uber in favor of distributed, worker-owned co-ops, orchestrated through collective authentication systems like bitcoin and blockchains instead of top-down control.

• Resist the short-term, growth-addicted mindset of publicly traded markets, by delivering dividends instead of share price increases, or opting to stay private or buy back one’s own shares.

• Recognize contributions of land and labor as important as capital, and develop business ecosystems that work more like family companies, investing in the local economies on which they ultimately depend.

Rushkoff calls on us to reboot this obsolete economic operating system and use the unique distributive power of the internet to break free of the winner-take-all game defining business today.  A fundamentally optimistic book, THROWING ROCKS AT THE GOOGLE BUS culminates with a series of practical steps to remake the economic operating system from the inside out—and prosper along the way.

“We’ve optimized for growth. But have we lost our way? As an economy? As a community? As a society with a value proposition that doesn’t make sense on a human or economic level? Rushkoff asks questions that matter. A challenging and necessary read.”
—Sherry Turkle, author of Reclaiming Conversation

“Every great advance begins when someone sees that what everyone else takes for granted may not actually be true. Douglas Rushkoff questions the deepest assumptions of the modern economy, and blazes a path towards a more human centered world.”
—Tim O’Reilly, founder of O’Reilly Media

“Douglas Rushkoff is one of today’s most incisive media theorists and a provocative critic of our digital economy. He’s also fun to read.”
—Walter Isaacson, President and CEO of the Aspen Institute and author of The Innovators

“In what could be seen as a crisis, Rushkoff shares his smart, optimistic and pragmatic perspective about how both businesses and consumers can re-imagine today’s current economic operating system in the digital age—and prosper.”
—Bonin Bough, Chief Media & eCommerce Officer at Mondelez

“If you don’t know Rushkoff, you’re not serious about figuring out what’s going to happen next.”
—Seth Godin, author of Linchpin

“Rushkoff in his signature provocative and thoughtful style challenges us to “get over our addiction to growth”. In a world where we have a market that rewards personal gain at the expense of the system, it appears that science and technology that could possibly save the world may end up turning our growth into the cancer that destroys us. Whether you are researcher, startup CEO or an innocent bystander, this book is essential reading to reflect on some of our fundamental assumptions and values before it’s too late.”
–Joichi Ito, Director, MIT Media Lab