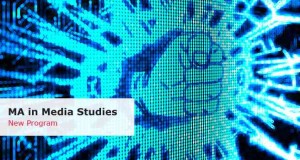 It’s official. I’m a university professor – and at a public university where you can all come and study and work and devise the future of civilization for cheap. The official press release is below. The skinny? I’ve taken my first university post, as a professor of media studies at CUNY/Queens College, where I’ll be helping to build a first-of-its-kind media studies program. Instead of training people to become advertisers or to write the next useless phone app (and raise VC), I’m going to support people who want to see through the media, and use it to wage attacks on the status quo. This is media studies for Occupiers.

Queens, NY, May 27, 2014 — Queens College of the City University of New York announces today that Douglas Rushkoff, the famed cyberculture expert who originated concepts such as “viral media” and “social currency,” will be joining its faculty. This marks the first full-time academic role for the prolific media theorist, award-winning author, and documentarian, who is considered one of the most influential thinkers of the digital age. Starting this August, he will help lead the development of a new Master of Arts in Media Studies program that will address the technological and market forces that dominate our daily lives.

Rushkoff, who holds a PhD in New Media and Digital Culture, is the author of over a dozen best-selling books, the winner of the first Neil Postman Award for Career Achievement in Public Intellectual Activity, and creator of four award-winning PBS “Frontline” documentaries on the cultural and societal impact of media and the media industry. A regular commentator for CNN, “CBS Sunday Morning,” and NPR, he has shaped current thinking on topics such as corporatism, “digital natives” (another Rushkoff coinage), and distributed solutions to social problems – from Occupy to Bitcoin. His latest book, Present Shock: When Everything Happens Now (2013) – described as “invaluable” by the New York Times – introduced the concept of the always-on “digital present-ism.” His recent PBS documentary Generation Like (2014) explored the influence of social media on youth culture.

Rushkoff’s move to academia reflects his interest in social justice and the need to build media literacy in the rapidly evolving global media environment. “This is a rally for consciousness,” says Rushkoff. “The essential skill in a digital age is to understand the biases of the landscape – to be able to think critically and act purposefully with these tools – lest the tools and companies behind them use us instead.”

“I wish to foster a deeper awareness and more purposeful implementation of media, and this can be best accomplished at a mission-driven public institution such as Queens College,” says Rushkoff, a native of Queens who was inspired to join the school because of its rich legacy of social dialogue and engagement. “I want to teach a diverse range of students without putting them into lifelong debt. Besides, where better to work on media in the people’s interest than a public university?”

“The college, with its unique community of students, creative artists, and scholars, has a tradition of cultivating a learning environment supportive of critical thinking and social consciousness,” adds Media Studies Chair and Professor Richard Maxwell. “Rushkoff’s contributions to current thinking in technology, media, and society are at the forefront of the evolving study of media. He’s a great fit for our program and will complement our existing faculty in providing a transformative learning experience.”

The new master’s program aims to balance the theoretical and applied study of media to question conventional understanding of media technology, content, and audiences. It will rethink the media’s role in urban development, economic justice, political activism, environmental responsibility, public policy and cultural identity. Students will be engaged in project-based learning and highly individualized courses of study.

Says Queens College’s Interim President Evangelos Gizis, “Dr. Rushkoff joins a remarkable community of academics who are providing relevant and thoughtful learning to the next generation. Our success in attracting leading scholars such as Rushkoff is a reflection of the academic excellence that we have cultivated at Queens College.”

“A pioneering media scholar such as Rushkoff joining our faculty helps us fulfill our mission,” notes Dean of Arts and Humanities William McClure. “As a public institution, we’re committed to providing students access to the best education possible irrespective of their socioeconomic status – including access to top thinkers in our nation.”

Rushkoff joins the ranks of acclaimed scholars in emerging areas of study at Queens College, including department chair Maxwell, the co-author of Greening the Media (2012) who is a political economist and expert on cultural consumption and the environmental impact of media technology; and MA program director Mara Einstein, an expert in consumption and cause marketing.

Starting in August, Rushkoff will be teaching courses in propaganda and media theory. He plans to involve students in his continuing work as advisor for the digital literacy platform Codecademy and other New York startups, his books and documentaries, and the relaunch of his radio show, “The Media Squat”, which models open source and collectivist approaches to social and economic challenges.

The new Master of Arts in Media Studies program begins offering courses this August and will welcome its first cohort in Spring 2015.

If you want to take the undergraduate course, Propaganda, as a non-enrolled student, apply here and then email me.

Previous Post: Punching Nerds in the Face is Never a Good Thing

Next Post: CNN: The Russia Hack is Not About You