Douglas Rushkoff is one of those rare writers and friends. He can ask big gnarly questions, and then before you know it, present a buffet of solutions that leave you with a ravenous appetite to dig into the future.

In Program or Be Programmed, Rushkoff made the compelling case for the need for all of us to be programmers. Choose to program and “you gain access to the control panel of civilization. Choose the latter, and it could be the last real choice you get to make.” Yikes, I read that and immediately went to use my limited HTML skills on my nascent website.

Despite my admiration for his past work, I approach his new book with some trepidation. I guess I thought Rushkoff was going to be the one throwing rocks. Nope. I should have known better. Rushkoff is always more complicated than that. 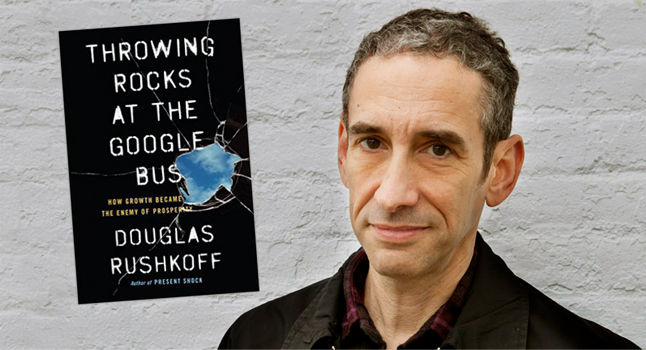 In Throwing Rocks At The Google Bus, Rushkoff begins with some powerful truth telling.

The digital economy is breaking things. The media can’t seem to survive digitization. Drivers are losing to Uber. Airbnb is turning neighbors apartments into rentable dorm rooms, and as he lays out the current state of play – event tech visionaries find the demands of the startup economy closing their vision.

But Rushkoff isn’t claiming Google GOOGL -0.96% is at fault. He says: “there is something troubling about the way Google is impacting the world, but neither it’s buses nor the people in them are the core problem; they’re just and easy target. He says we’ve brought a set of industrial age. “We are running a 21st-century digital economy on a 13th Century printing-press era operating system,” writes Rushkoff.

Now it’s not all bad. “On the bright side, millionaires and billionaires are being minted, maybe not enough to compensate for the millions of people being displaced, from their jobs, but they are inspiring just the same.”

Looking for an example, Rushkoff settles on Uber, and he takes on the company with relish. “By calling itself a platform rather than a taxi dispatcher, Uber has been able to work in a regulatory gray area that slashes overhead while inflating revenue. This is how Uber can be valued at over $18 billion dollars while many of its drivers make below minimum wage after expenses.”

The crux of the argument that Rushkoff makes is that the digital economy is a house of cards built on fictional growth metrics that drive companies to raise money, undercut human workers, sell on the public markets and then – almost inevitably – collapse under the weight of public market demands. And he’s not alone in his concern. Quoting Union Square Ventures founder Fred Wilson, the book shares Wilson’s blog post. In it Wilson “worries aloud that digital entrepreneurs are more focused the increasing monopolies and entreating value than they are on realizing the internet potential to promote value creation by many players.”

Growth, it turns out, may be an illusion. “If infinite growth is no longer a possibility or even desirable, then you must shift your sights away from ht big “win” in the form of an IPO, acquisition or growth target” writes Rushkoff. “Think of it less like a war, water total victory is the only option, and a bit more like peace, water eat objective is to find a way to keep it going.”

The core message of the book is that the current state of play in funding, driving, and exiting digital companies is unsustainable. And to bring that point home, Rushkoff shares his stories of  Ventureless Capital: the Patience of the Crowds. His example is a good one – his friend, and mine, Scott Heiferman. Heiferman founded Meetup after selling his first startup at the hight of the dot-com boom. Meetup aims to be a civic platform rather than a platform monopoly. “We’re not trying to vertically/horizontally integrate or get into news busses or invent self-driving space elevators. We know what business e want to be in, it’s a big opportunity and we don’t see ourselves and empire-building imperialists.” Meetup aims to be Meetup, and to grow that business – a perfect Rushkoff example.

In Throwing Rocks at the Google Bus, Rushkoff calls on business to:

“None of us can wave a magic wand and transform the economy from an extractive endgame into a prosperous commons,” writes Rushkoff in his conclusion. “However, I do believe we can reposting our careers and our businesses to become less a part of the problem than participants in the solution. There’s a lot of hope here.”

Steven Rosenbaum is serial entrepreneur, author, and filmmaker. His latest book, Curate This! is in print and ebook on Amazon.com. He is the CEO of Waywire.com (enterprise.waywire.com)

Next Post: Quartz Reviews Throwing Rocks at the Google Bus