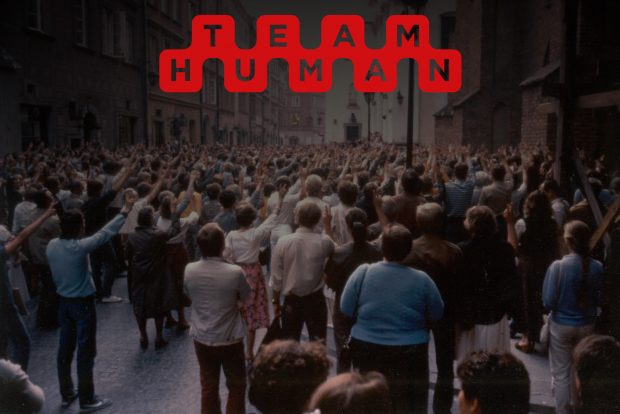 I thought long and hard about how best to respond to the thousands of emails I’ve received since publishing Throwing Rocks at the Google Bus. People, companies, mayors, cooperatives, towns and big corporations, all looking for ways to distribute prosperity more widely, start local currencies, build platform cooperatives, convert to employee ownership, offer dividends instead of capital gains, or crowdfund a bookstore. I’ve answered more than half – or about 20,000 of them – individually. But I realized that it’s really not me who has the answers; it’s you.

I’m not a one-stop shop for new social and economic strategies. But I know a heck of a lot of the people who have the answers – people who understand we have to stop optimizing human lives for economic growth, and start optimizing the economy for human prosperity. People who want to stop programming people for technology, and start programming technology for people. The people I’ve come to call Team Human.

So I’m going back on the air with a new audio show – my first since doing The Media Squat on WFMU a decade ago. It’s a weekly podcast called Team Human, looking to challenge the operating systems driving our society, reveal its embedded codes, and share strategies for sustainable living, economic justice, and preservation of the quirky nooks and crannies that make people so much more than mere programs.

Team Human is where the conscious beats the automatic. An intervention by people, on behalf of people. All in delightful audio – perhaps the most intimate, enveloping medium yet developed.

My books may have been good for addressing the symptoms of social and economic injustice, and doing forensic analysis of the root causes for our problems – sometimes dating back to things like the invention of central currency and chartered monopolies in the late Middle Ages. But social change requires more than knowledge of where we are and how we got here. It requires a shift in values, in perception, and in the way we understand what it means to be a human being. It’s more fundamental than policy, because it is what animates us in the first place.

If we understand human beings the way the market does – in terms of our ‘utility value’ – then all is surely lost before we’ve even begun. Machines will always have greater utility value than humans. And people are certainly an impediment to a marketplace where assets are abstractions of derivatives, not the stuff that sustains life. To the market, the derivatives on water are worth a whole lot more than water, itself.

Meanwhile, if we look at human beings the way some of the scientists and CEO of our leading technology companies do, then we’re just some temporary stage on information’s journey toward higher states of complexity. The minute humans are outpaced by artificial intelligence – the moment of the ‘singularity’ – we will be officially and effectively obsolete. In their perverted understanding of evolution, human beings should pass the torch. Any effort to stick around as something more than a memory card may as well be hubris.

Well, I don’t buy that. And I know a lot of you don’t, either. It’s time we forge the solidarity we need to press for the human agenda – without shame or embarrassment.

People are cool, in our own weird, clumsy, and ambiguous way. The markets and technologies we’ve created are not new gods. They are not our replacements, but mechanisms we’ve constructed to make our lives better, more just, and more meaningful.

That’s why I’ll be engaging in real-time, no-holds-barred discussions with people who are hacking the machine to make it more compatible with human life, and helping redefine what it means to stay human in a digital age. Members of Team Human such as debt activists Astra Taylor and Tom Gokey, Occupy Wall Street founder Micah White, YesMan Andy Bichlbaum, Institute for the Future chief Marina Gorbis, co-op organizer Esteban Kelly, DNA artist Heather Dewey-Hagborg, tech environmentalist Richard Maxwell, and so many more, including, hopefully, you too.

Please join Team Human – both as a listener and as a human teammate. It’s not too late to reclaim planet Earth for its people, to give land and labor a voice along with capital, and to share our best strategies for mutual aid, environmental sustainability, and economic justice. In the real world, we humans have the home field advantage. Let’s use it.

Next Post: Douglas Rushkoff's New Podcast Explores The Future Of Humans In A Digital World