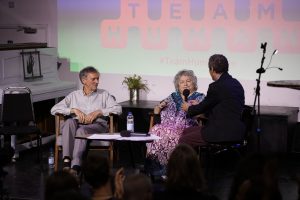 Presented here is Part One of the program, featuring Douglas in conversation with Pat Cadigan. Pat and Douglas take a winding path through topics including virtual reality, identity, and telling the future. Inspired by Pat’s vivid and clairvoyant imagination Rushkoff asks his audience to use the term “future” as a verb, exclaiming, “We can future together!”

Opening the show, Rushkoff digs deeper into his recent, now viral essay, “Survival of the Richest.” Rather than succumb to the notion that the future is something we must insulate ourselves from, what if we both imagined and committed to building a future that amplifies connection and mutual aid?

Pat Cadigan is a science fiction, fantasy, and horror writer, three-time winner of the Locus Award, twice-winner of the Arthur C. Clarke Award, one-time winner of the Hugo Award. Recovering American living in North London with her husband, the Original Chris Fowler, and their cats, Gentleman Jynx and the Angel Castiel.

Learn more about Pat at https://patcadigan.wordpress.com/

Patrons have immediate access to the complete, uninterrupted show with Pat, Rupert, and an audience Q&A.

Visit https://www.patreon.com/teamhuman to support the show.

A special thanks to Luke Robert Mason for producing this live event. The music you hear is thanks to Dischord Records and Fugazi,  R.U.Sirius, and Mike Watt.

Live image thanks to Hannah Close.

Trading card thanks to Bobby Campbell.